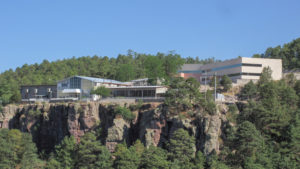 Our main facility, the Baptist Educational Complex, and our church, the Grand Vision Baptist Church, are located in the northwest region of Mexico, in the town of Bocoyna, in the state of Chihuahua. Bocoyna is a small town of about 1,000 inhabitants. It resides near the Sierra Madre Occidental (Western National Forest), home of the famous Copper Canyon and the Pacific Railway.

The climate here is very dry with large pine trees and beautiful vistas. The area is considered “high desert” with our highest point reaching nearly 9,000 feet above sea level.

Tourism and agriculture used to be the biggest industries in this area, however, the influx of drug cartels has almost completely eliminated tourist traffic.

The primary inhabitants of the region are the Tarahumara Indians (also known as the Rarámuri). They are renowned for their long-distance running ability. They once populated the entire state of Chihuahua but retreated into the mountains in the western part of the state in the 16th century. The region is now called the “Sierra Tarahumara” (Tarahumara Mountains) as a result of their presence.

Estimates put the Tarahumara population at about 60,000 people. Most of them continue to practice their tradition lifestyle, living in caves, cliff overhangs or small cabins. They grow corn and beans and many still raise cattle, sheep or goats. They speak their own language (Rarámuri) and many don’t speak Spanish.

The Tarahumara religion is a mix of indigenous customs and Roman Catholicism. There was a strong Jesuit mission activity during the 1600’s which was met by resistance. When the Jesuit order was expelled, the Tarahumara were left to adopt their interpretation of the Catholic beliefs. Some Tarahumaras maintain a belief that the afterlife is a mirror image of the mortal world and that good deeds should be performed, not for spiritual reward, but for the improvement of life on earth.

Most of our missions in the area, especially the Panalachi Baptist Mission, are dedicated to bring the Word of God to the Tarahumara. Over 80% of our children enrolled in our Christian Schools are Tarahumara. Most of them have received the Lord as their savior and many have gone on to be baptized into the church.

The region is home to other indigenous cultures including the Pima, Mayo, Huichol, Huasteco, Tepehuan, Cora, and Kiliguas. Many of our Bible Institute graduates have dedicated their lives to spreading The Gospel among these cultures.